Middle School Students Take Learning Out of This World 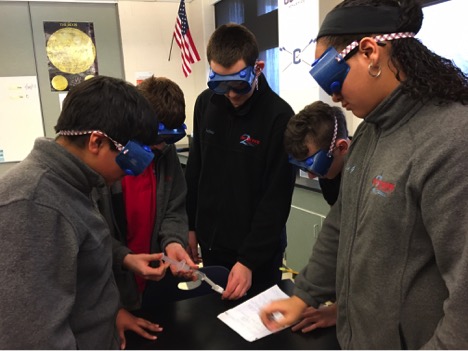 This fall, over 300 students at Two Rivers Magnet Middle School took part in the “Student Spaceflight Experiments Program” (SSEP), partially funded through NASA CTSGC. Of those 300+ students, a single group of five took the top honor of securing a spot on the M11 America Payload to the International Space Station. Eighth graders Kassidy Gagnon of East Hartford, Jack McCann of Vernon, Andrew Niemczyk of Vernon, Angel Soto of East Hartford, and Kieran Yanaway of South Windsor designed and proposed an experiment that addresses the question: “How does microgravity affect algae growth?”

The students came up with the idea and preliminary design, and found a mentor in Dr. Martin Gross, a Post-Doctoral Research Associate at Iowa State University who specializes in algae production and research. Dr. Gross and the students have corresponded with each other with regards to design and data analysis of their mini- lab upon its return to Earth. In addition to the experiment running at the International Space Station, the students will run an identical ground truth experiment at school, and will compare the two mini-labs in terms of algae growth at the conclusion of the space flight.

SSEP is a program of the National Center for Earth and Space Science Education (NCESSE) in the U.S. and the Arthur C. Clarke Institute for Space Education internationally. It is enabled through a strategic partnership with DreamUp PBC and NanoRacks LLC, which are working with NASA under a Space Act Agreement as part of the utilization of the International Space Station as a National Laboratory. SSEP is the first pre-college STEM education program that is both a U.S. national initiative and implemented as an on-orbit commercial space venture.

The students’ experiment, along with experiments from 20 different communities, is scheduled to launch from Cape Canaveral Air Force Station in Florida aboard a SpaceX-12 rocket, in August 2017.